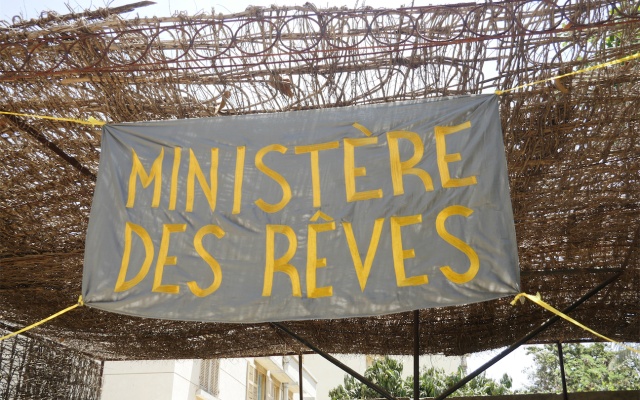 RAW Material Company and discursive “manifestations of capacity” in Dakar 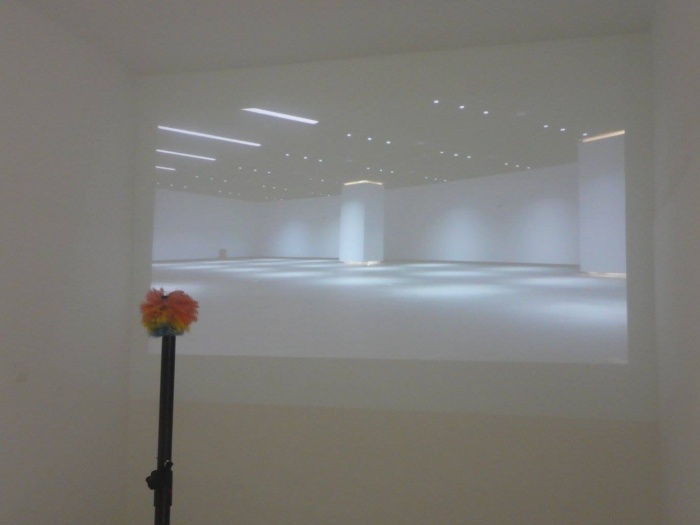 One Friday evening in early 2017 a group of people, some francophone, some anglophone, many wolophone, found themselves in a small dark room in Dakar speaking into a radio microphone and describing to one another what they would place in the city’s Musée des Civilisations Noires, at the time of writing a museum completed to the highest specifications with Chinese yuan, but completely void of a single piece of art. A video filmed within the museum showing long pans of empty exhibition rooms and a gaping central hall played on a loop against the room’s back wall.

The piece was part of the British artist Jeremy Hutchison's presentation with Senegalese art critic Massamba Mbaye at RAW Material Company, the event in itself part of RAW’s weekly program of public talks.1 Occupying a central place in the global art circuit, RAW has, since 2011, been exploring and testing the zone that ties together and disrupts art, knowledge, and society. Rooted in Dakar, Pan-African in its ideology and open to the world, RAW’s programming sits at the nexus of multiple practices and serves as an example to think about how an independent art center may use programming to instigate societal engagement. Following five years of intense exhibition-making, RAW took what its founding artistic director Koyo Kouoh describes as an “institutional sabbatical” in 2015 and reopened for the 2016 Dak’art Biennial with a curatorial focus on discursive frameworks and alternative forms of artistic education. I argue that RAW’s new direction is week in week out actively producing the conditions for the performance of innovative ways of being, or “manifestations of capacity” to borrow from Jacques Rancière, that occupy a space of urgency and that uniquely contribute to both the artistic and political horizon of Senegalese society.2 Taking a closer look at the RAW Académie in particular allows us to better understand the center’s innovative strategies and trajectory.

The creation of the RAW Académie in 2016 is particularly striking for thinking through how RAW Material Company uses non-exhibitionary curatorial programming to transform realities into potentials and deadlock into momentum. It is worth taking a moment here to underline an important aspect of the local context out of which the Académie grew. In Senegal, the university sector is in a state of extreme political and financial fragility. Supporters of Khalifa Sall, the mayor of Dakar currently incarcerated on charges of embezzlement of public funds, were recently blocked from demonstrating at the Université Cheikh Anta Diop campus in the capital. In May of this year, a part of the student body at Université Gaston Berger in the country’s north were driven to organize a hunger strike in protest against aspects of the institution’s organization. Recent strikes in Dakar over the late payment of scholarships have caused damage and injury in the university district. Occupying a position of authority within one of Senegal’s public universities has for the last twenty years been a stepping stone to finishing a career in a civil service office with a comfortable salary and almost complete impunity, on the condition of course that one toes the party line. This situation has unsurprisingly led to a chronic state of entropy in the country’s higher education sector. The significance of RAW’s proposal thus becomes clear; in a country where the intellectual freedom of young people is compromised in the very sites where it is meant to flourish, the creation of a space of alternative education, through the prism of art practice and its expansive potentials, is not anodyne. 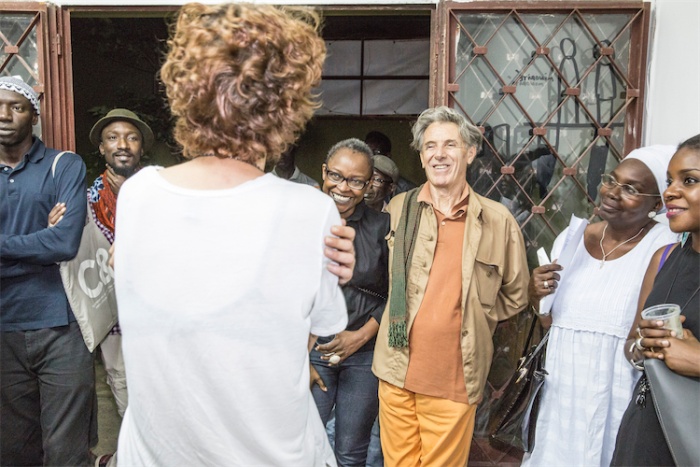 Following a fruitful symposium organized in 2014 on artistic education in Africa, at another moment of repeated student protests in Dakar, RAW Material Company made the decision to lay out a framework within and beyond which radical new epistemologies could come to roost and could be accessed, shaken up, tested and challenged by young art practitioners and, importantly, a wider public. RAW Académie was born. Taking place over two separate eight-week long sessions every year, each Académie has a different lead faculty who defines the session’s conceptual framework and invites friends, collaborators and co-conspirators from across the planet to workshop the concept with ten young art practitioners from a host of different disciplines, selected following an open call. The first Académie, named Hunger Incorporated and taking place from October to December 2016, was directed by Beirut-based film programmer and critic Rasha Salti and explored the invisibility of networks of consumption, be it the consumption of natural resources, food or narratives. Académie Session 2, Angazi, but I’m Sure, took place in Spring 2017 with Chimurenga, the pan-African platform for culture and publishing, as lead faculty. Looking towards the future, Session 3 will run in Autumn 2017 and will be directed by the subversive, Senegalese, hip-hopified news outlet Journal Rappé.

The lineage within which RAW Material Company inscribes itself is noteworthy and reminds us of the extent to which its current practice is indebted to radical Senegalese practitioners, in particular the Laboratoire Agit’Art, a subversive, multidisciplinary collective active in Dakar since the 1970s. In Word? Word! Word?, the monograph of the late, great artist and Laboratoire founding member Issa Samb’s lifelong work, Simon Njami describes one of the central premises of the Laboratoire Agit’Art’s existence; the necessary symbiosis of art making and proximity to socio-political realities.3 The influence of Samb’s practice and philosophical thrust on RAW Material Company is well known, and it is particularly the Laboratoire’s propulsion to explore this symbiosis through instigating a “space of the possible” that is relevant to the discussion at hand.4 While the Laboratoire nurtured social transformation through numerous activities including performances, writing and filmmaking, one of the central tenets of the collective’s history has been its investment in particular spaces, be it the original Village des arts until their eviction in 1983 or Issa Samb’s courtyard in the city’s downtown Plateau district. Although these two aspects of the Laboratoire’s work may at first seem paradoxical - proximity to society and geographical distancing through the creation of distinct spaces - we can instead think of this paradox as the fashioning of a different way of thinking about how to produce proximity. Proximity may be cultivated via the nurturing of a sphere wherein rigorously upheld models of being, thinking and interacting are suspended in favor of expressive freedoms that allow people to be truer versions of themselves. RAW has taken up the Laboratoire’s mantle, existing as a space that disrupts the usual order of things in favor of playing out not socio-political reductive, restrictive realities but rather socio-political potentials.

Against the backdrop of current hyper-commercialization and rampant appropriation of African art and culture in the former colonial West, exemplified by the recent Mode Africa Now program at Galeries Lafayette in Paris, with the Académie it is noteworthy that RAW has turned its efforts towards a non-object driven program. Candidates to the Académie provide a project proposal as part of their application, but this project can take a multitude of forms, ranging from an event to an essay to a painting, and it functions as a springboard from which RAW staff, faculty and other fellows can engage with one another conceptually. Visual culture is certainly primordial to Académie programs, with past faculty members including filmmakers Jean-Pierre Bekolo, Newton Aduaka and Ghassan Salhab, artist Ursula Biemann, art critics and writers Lionel Manga and Dominique Malaquais, but the emphasis is placed on critical reflection around their practice and the way that this is situated in society. The Académie operates in a distinctly conceptual field that I read as a rebuttal to the absorption of African art into the international market and a reclaiming of how we might engage with art from an African perspective. 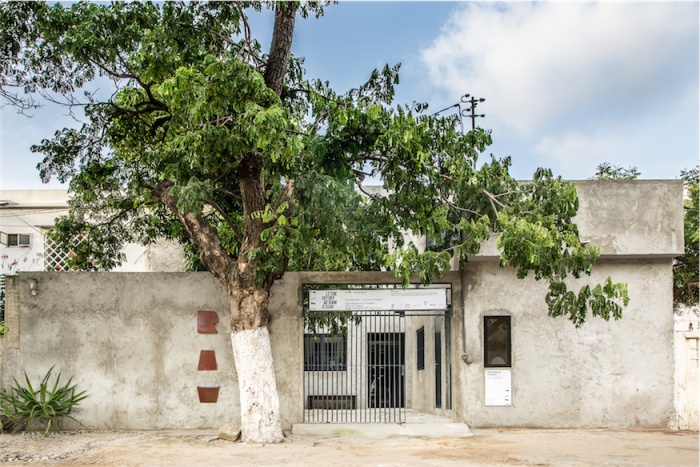 This approach is reinforced by RAW’s other pillars of activity; a weekly program of public talks, a residency space, an ambitious commitment to publishing and the upkeep and renewal of a library specialized in contemporary African art. In a space that is all about art, but that has for the last year shown a relatively small amount of the stuff, the visitor to RAW is pushed into a realm where the production and sharing of knowledge is placed center stage. The results are fascinating; fellows in the first Académie organized weekly curated dinners that involved kidnappings, silent meals and fancy dress, culminating in a ten-minute long performance where they re-enacted each other’s memories of their time together. During Angazi, but I’m Sure the fellows oscillated between wanting to listen and engage, produce, and reflect. They spent the last day giving this conceptual experience material form, inscribing it on the RAW site itself in a dance of quotes from the Académie sessions that were drawn onto the space’s interior and exterior walls. In both cases, the fellows were negotiating how to perform and create in an ambiguous zone outside of the usual residency or exhibition formula where production and display are paramount. Such a disruption produces instability and in turn, urgency. This urgency certainly does not push everyone to act, but it suspends how we think we relate to art and life for at least a time and more often than not does lead to action, to an appropriation of the situation. Returning to RAW’s relationship to the Laboratoire Agit’Art briefly discussed above, we see how the space of RAW functions in terms of potentialities, where art world and socio-political visual and temporal norms are left at the door, and where there are instead propositions, hallucinations, dreams, and “flights” between the future and the now.5

This curatorial investment in discursive, educative frameworks is nothing short of radical in the context of a crisis-laden Senegalese higher education system where the calcification of young hearts and minds is a real threat. It is rooted firmly in the heritage of the Laboratoire Agit’Art and their practice of using certain spaces as “zones of temporary autonomy,” where new perspectives for society can be tested through art making and always, always, talking.6 And while the value of African art rises exponentially to the north of the Mediterranean, RAW’s current dematerialized proposal offers an alternative strategy for reclaiming discourse around contemporary African cultural practice. Hashing out the possibilities for a different future in communion and dissensus with the art historians, sculptors, filmmakers, journalists, architects, painters and activists that walk through the door, RAW Material Company is prodding its public towards action, and in the great work that is society, figuring out how to be a space that accompanies the momentum of this “work in motion.”7 On the Friday night of Hutchison’s presentation, a poetic doubling of RAW Material Company’s space and that of the Musée des Civilisations Noires’ capacious, empty halls took place, each serving as a mirror to the other, each revealing the performative potential of the other’s hollowness.

Dulcie Abrahams Altass was born and grew up in London, where she received her degree in Art History and French at University College, London. Her studies took her to Dakar in 2013 for a year-long internship with the multidisciplinary artist's collective Les Petites Pierres, during which time she worked on numerous artistic interventions in the city’s urban space. She also undertook a year's study at universities Paris I and IV, specializing in African history. Building on her prior engagement with collaborative art projects, she returned to Senegal on several occasions for research and to contribute to the organization of a series of cinema clubs. Having graduated in 2016 with first class honors and as recipient of the Violet Hall prize for academic achievement, she is now based in Dakar where she was a fellow of the first RAW Académie and is now curatorial assistant at RAW Material Company.

7 Nikos Papastergiadis and Charles Esche in “Assemblies in Art and Politics: An interview with Jacques Rancière,” p. 8

7 Nikos Papastergiadis and Charles Esche in “Assemblies in Art and Politics: An interview with Jacques Rancière,” p. 8