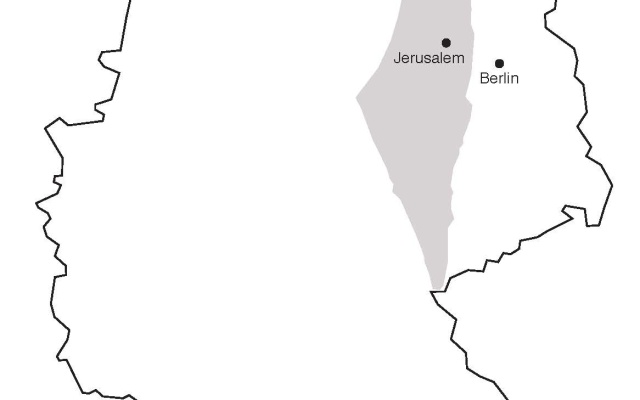 On 14 May 1948, the state of Israel was founded by virtue of the “natural and historical rights of the Jews.” The neighboring Arab countries declared war on it the following night. To this day, many Arab and Muslim countries do not recognize Israel, since its founding involved the disenfranchisement and displacement of Palestinians who were native to the territory. But particularly in Europe and America, after the annihilation of millions of Jews perpetrated by the German Reich, many saw a Jewish state as a safe homeland for the historically, incomparably persecuted Jews. The Federal Republic of Germany, as the successor state to the German Reich, which was responsible for the Holocaust, saw itself as having a particular liability in relation to Israel.

In an interview on 8 December 2005, Iran’s president Mahmoud Ahmadinejad suggested relocating Israel to Europe. If the European states insisted that Hitler had killed millions of Jews, then they should offer the Zionists compensation from their own provinces, for instance in Germany and Austria, to set up their state there rather than in Palestine. Iran would aid Europe in this undertaking. Western heads of state as well as the speaker of the Israeli foreign ministry expressed outrage at Ahmadinejad’s interview, especially since he again denied the right for the state of Israel to exist. Even German Chancellor Angela Merkel and then-Austrian Chancellor Wolfgang Schüssel offered no comment on the proposal to relocate Israel, despite being directly implicated in the plan.

The Jewish Renaissance in Poland, initiated by Israeli artist Yael Bartana, also calls for the return of Jews to Europe, or more precisely to Poland, which alone lost around three million Jewish citizens during the Holocaust. Those called on to return home are all those, Non-Jews included, who regard themselves as foreign or other. For the Jews that populate Israel today are, for the most part, no longer refugees or survivors of the Holocaust. Perhaps they are not even Jews, but only said so to get Israeli citizenship. And the Poland of the Jewish Renaissance also need not be located in the state of Poland, which was shifted westward after the Second World War according to the Potsdam Agreement of the Allied powers. A large part of contemporary Poland used to belong to Germany. A large part of what used to be Poland now belongs to the Ukraine and Belarus.

National state borders constantly undergo shifts due to war and treaties. Poland has particularly suffered under this phenomenon. With the divisions of 1772, 1793, and 1795, it was entirely robbed of its sovereignty and divided up between Prussia, Austria, and Russia. For 123 years there was no independent Polish state in existence. Jewish and Polish fates are therefore related to some extent. Enough, in any case, that with all necessary differences Polish nationalists have also come to understand their country as chosen by God, as a “Christ among nations”.

Due to the establishment of the United Nations, sanctions against wars of aggression, and the deterrent of weapons of mass destruction, there is an effort today to permanently avoid wars and shifts in borders. But precisely since borders in large parts of the world appear to be stable for a historically singular duration, with states at the most splitting up into ever smaller units, they are simultaneously losing the globalization that forms the basis for this. International trade, international communication, and international tourism are constantly on the increase. Lifestyles in different countries and continents are becoming more and more similar.

All the more tragic, then, is the fate of those who are left out of globalization. Those for whom the borders resemble insurmountable walls. Those who cannot travel anywhere, with or without a passport. Who cannot even more freely within their own country. Whether because they don’t have the necessary rights or the financial means.

The existing injustice can be minimized by no longer cementing the borders between and within states, but subjecting them to a constant, peaceful shifting. Then it would no longer be necessary to go to the trouble of emigrating to move to a different state. You could just comfortably stay wherever you are, living in Spain, then Japan, then Malawi. You would no longer choose between different parties, but different states and forms of government. Democracy, single party dictatorship, monarchy, oligarchy – what’s my favorite? Do I like it so much that I would even want to take a form of government along with me?

States don’t have to constantly shift over our planet, growing and shrinking. They can also abruptly jump from one place to the next, in the meantime disappearing entirely. When Theodor Herzl founded the Zionist movement, it was unimportant to him that the new Jewish state be located precisely in Canaan. He especially considered founding a “colony” in Argentina or Uganda, which was only thinly settled by European immigrants in the nineteenth century. Analogously, on 5 October 2007, Mahmoud Ahmadinejad suggested relocating the Israelis to the sparsely populated areas of North America, particularly Canada and Alaska. But it’s either very cold there or the area is under environmental protection.

The real place is in the middle of Europe, in the middle of Germany, which was responsible for the Holocaust and the displacement. Germany is, in fact, quite densely populated as a whole, but the area of the former GDR, which is approximately four times as large as Israel and Palestine, is currently suffering from massive depopulation. Since reunification in 1990, hundreds of billions of euros have been invested here in modern infrastructure. Nonetheless, it lacks employment options and whole neighborhoods are now threatened with collapse due to underpopulation. There would be room here not only for new Jewish settlements, but also for new Palestinian ones. For a long time now, the number of Palestinians living in exile has been so large that Israel-Palestine would be a tight squeeze for all of them, even if all the Jews left. In eastern Germany, however, there would be enough room to duplicate Israel-Palestine. All the areas that belonged to Israel in the original state would be given to Palestine, and vice versa. Since many Israelis don’t even come from Europe, but from Africa, America, and Asia, it would only be consistent for Palestinians to also return home to Europe.

But how can this state-shifting begin when the historic nation-states vehemently oppose even the attempts at independence of individual regions? Resistance could be even more fierce in superstructures like the EU, where a drop in the importance of nation states is all the more potently felt.

State-wandering manifests as a concerted citizens’ movement. “Wanderers” who already inhabit a certain region or move to it hoist the flag, speak the languages, cook the cuisine, don the traditional clothing, adopt the manners, perform the rituals, celebrate the festivals, live the poverty, simulate the prosperity and apply make-up to adapt to the predominant ethnic groups in the respective states.

Thanks to Augmented Reality, not all of these changes have to be done in real life; instead, homes virtually alter their facades, cars their bodies, streets their names, words their sound, faces their color and shape. But there are also strictly analogous Wanderers who insist on doing everything for real and either take clashes with the law for granted or have a vested interest in causing them. They occupy schools and change their curricula, swap traffic and street signs, and battle militant nationalists who do everything they can to keep, at least certain regions, completely Wanderer-free.

For the Wanderers, it is a matter of opposing both the ethnically and territorially defined national state and traditional cultural diversity-leveling globalization. Their xenocentric folklore is a camp gesamtkunstwerk.

Wanderers have an ambivalent relationship to the nationalities and ethnic groups they copy. Some accuse the Wanderers of assuming their identity only superficially and spoofing it. Formerly, or still-oppressed, nationalities and ethnic groups accuse them of neo-colonial or racist appropriation that goes far beyond phenomena such as blackfacing, Pocahottie or wiggers.

At the same time, there are diasporas that make pacts with the Wanderers to draw attention to their interests, and settlers who infiltrate them with the intent of permanently occupying a territory and preparing it for annexation, similar to radical Zionists on the West Bank. This gives the actual states justification to fight the Wanderers and any form of multiculturalism. Could they be the ones planting settlers and radicals in the Wanderers’ midst?

Translated from the German by Amy Patton

Ingo Niermann (* 1969, Bielefeld) is a writer and the editor of the speculative book series Solution. His debut novel Der Effekt was published in 2001. Recent books include Solution 257: Complete Love (2016), Solution 264–274: Drill Nation (2015), Concentration (ed., 2015), David Lieske: I Tried to Make This Work (2015), Solution 247-261: Love (ed., 2013), Choose Drill (2011), The Future of Art: A Manual (2011, with Erik Niedling), Solution 186–195: Dubai Democracy (2010), Solution 1–10: Umbauland (2009), Solution 9: The Great Pyramid (with Jens Thiel, 2008), and The Curious World of Drugs and Their Friends (with Adriano Sack, 2008). Niermann co-founded the revolutionary collective Redesigndeutschland, invented a tomb for all people, the Great Pyramid (thegreatpyramid.de), and together with Rem Koolhaas he has been building a tool for public ballots – Vote – in Gwangju, Korea. In cooperation with Haus der Kulturen der Welt in Berlin Niermann started the international digital publishing project Fiktion (fiktion.cc). Niermann is currently living in Basel. www.ingoniermann.com