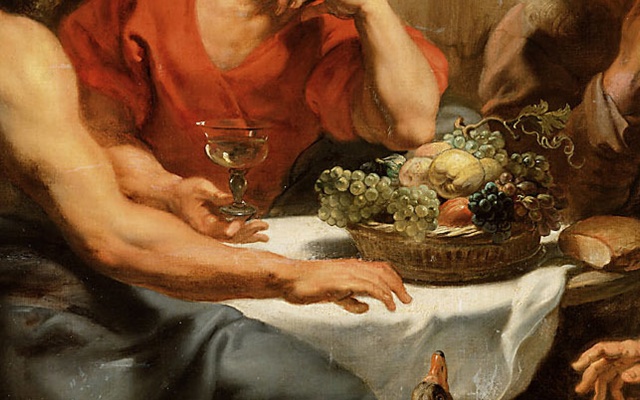 Sociologists from the Berlin Institute for Population and Development report “that foreigners who come to live in Germany tend to remain strangers, even after 50 years and three generations in some cases.”1 The immigrant populations in Belgium tend to disassociate with the Flemish and Walloon regional communities while sometimes paradoxically sharing the idea of “Belgian” identity far more optimistically than “titular” communities.2 Researchers indicate,3 that the newcomers are scrupulously analyzed by the host societies as problematic with this “scapegoat logic”: it allows them to ignore the universal structural problems of the society such as inequality. Politicians attribute an array of problems to the failure of integration, but in this article, I will argue that we are in fact dealing with the failure of hospitality. And I will also argue that we don’t need to fix it. 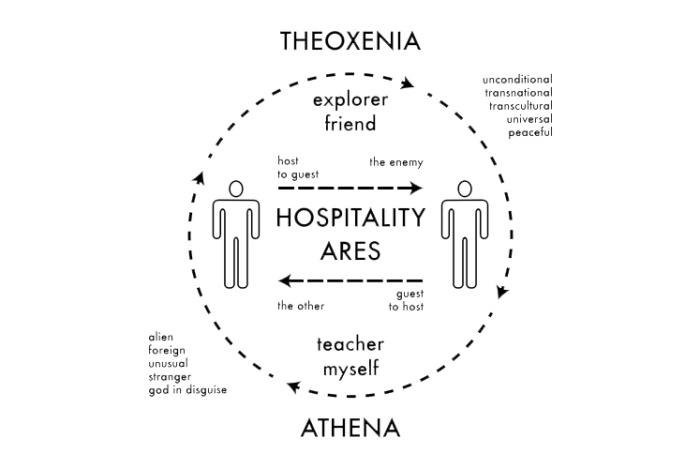 The term “hospitality” has many distinctive definitions and origins. In Ancient Greece, one of the most important protocols of social life was called theoxenia. Xenos (θεός – “god”; ξένος, – “alien,” “foreign,” “strange,” “unusual,” “guest”) is an ambiguous term that had been used in Greek poetry from at least Homer onwards. The interpretation of it fluctuates from “stranger” to “guest friend” all the way to “enemy.” Further I would use “xenos” as the term referring to “newcomer” that isn’t defined from the perspective of the host’s understanding of an identity. Xenos is not a particular fixed identity such as guest, stranger, enemy, Other, visitor, partner, etc. – but it is all of them and much more at the very same time.

Theoxenia as a protocol of relating to the Other played an incremental role in the narratives that came down to us from Ancient Greek poets. In the last book of Homer’s The Iliad, the king of Troy, Priam, comes to the camp of Achaeans to claim the body of his fallen son Hector and the Greek hero Achilles, abiding by the rules of theoxenia, allows him to stay and provides him with food, a warm bed, and entertainment despite the hostilities on the battlefield and his own personal rage over the death of Patroclus.

The respect towards an unknown Other was a subject of special importance since (s)he/them could have been a disguised god. In the first book of The Odyssey, Telemachus welcomes Athena (masked as a humble maiden) into his home and protects her from the advances of Penelope’s rude suitors. He exercises the ritual of theoxenia and earns her favor, which leads to a change of heart in the goddess towards aiding his father Odysseus, who was abandoned by Athena for stealing a sacred statue of her from Troy’s temple in order to bring victory to Achaeans in the 10-year war. The return of Athena’s favor and further aid to Odysseus was justified by his son’s respect of theoxenia. 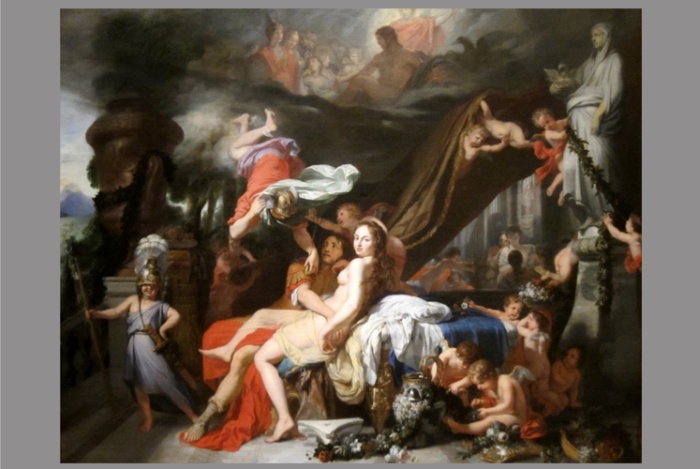 Let’s have a closer look at the key differences between hospitality and theoxenia. Hospitality in a neoliberal democratic Western-led world is one of the industries with key performance indicators, production, quality standards, is immediately and contractually reciprocal, and has attached to it an economy of profit.

First, theoxenia is unconditional. It is offered to anyone without imposition of the host’s moral, ethical, and political understandings as if they are universal or have prevalence in this geopolitical context. The mourning Achilles welcomed Priam into his camp without expecting reciprocity and wasn’t plotting a stratagem to use the king of Troy for the sake of some future act of revenge. He didn’t attempt to demonstrate moral or ethical superiority by being generous towards the enemy. He obeys theoxenia as if it were an answer to the equation of two plus two or following a health ritual like brushing your teeth before going to bed. In order words, his approach there is beyond selfish: it is cultural rather than opportunistic, pitiful, or predatory. Hospitality, on the other hand, is strictly reciprocal. The Cambridge dictionary defines hospitality as “the act of being friendly and welcoming to guests and visitors” or “food, drink, entertainment, etc. that an organization provides for guests or business partners.”4 Guests, visitors, and business partners are identified and sorted into the categories of newcomers. None of them are meant to stay longer than a specific period of time and are meant to recognize, as dominant, the host’s order of things, all the written and unwritten rules. The exchange and the dialogue should happen according to conditions established by the host. Conditionality of hospitality presumes that the guest, visitor, or business partner is meant to bring the value that is recognizable within the axis of the host’s understanding. Therefore, the unexpected is not expected and unwelcome. A stranger cannot be the subject of hospitality. The Other is meant to be categorized – and this is the first form of violence inflicted on him/her/they by the “hospitable” host.

First, theoxenia is unconditional. (...) Telemachus protects Athena disguised in a clothes of a poor woman from the drunk suitors thereby risking his life in order to prevent an act of rape that is not unordinary towards a woman of unknown provenance in Ithaca.

Second, theoxenia protects the condition of perpetual peace and excludes psychological or any other form of violence. The contemporary political interpretation of the term hospitality is closely related to terms like integration, assimilation, and tolerance. All three of them are presuming, although not admitting, an act of violence on the subjectivity of a xenos. The agencies of integration and assimilation demand from the Other to assume traditions and norms of the society, in which her/him/them are integrating as the new fundamentals. Ultimately, they violently break the subjectivity that the Other had before the integration or assimilation process had begun. The tolerance of a host towards a guest, on the other hand, is a mental construct of the borders of acceptable freedom within the cage of subjective reality defined as the principal within the society that is tolerating a guest. Telemachus protects Athena disguised in the clothes of a poor woman from the drunk suitors thereby risking his life in order to prevent an act of rape that is not unordinary towards a woman of unknown provenance in Ithaca. He places the respect of theoxenia over “the normality” of the order, preventing the violence even as it is justified by local norms, therefore he stands up against the local habits. The industry of hospitality is violent against the cultural subjectivity of the one subjected to it. The conditions of the host are the default form of the engagement between host and him/her/they. Xenos is meant to be assimilated, pacified, educated, or being performed on another act of the psychological and often physical violence. Hospitality, therefore, is a condition of strict distinction between “the good” and “the bad,” “the useful” and “the useless” and most importantly – “the friend” and “the enemy.” Hospitality is falling into the orbit of the political relations as they were defined by Carl Schmitt who famously claims that “the specific political distinction … is that between friend and enemy.”5 In the perpetual war of the sociopolitical imaginaries and competing world images, the genuine hospitality is meant to be provided only to those who either comply with host’s understanding of the reality or share it.

Third, theoxenia is transnational, transcultural, and universal. While contemporary hospitality is distinctly different among the people belonging to the same tribes – racially, socially, politically, ethnically, linguistically, etc. – theoxenia is equal in the face of any otherness. Trojans are foreigners to Achaeans, Achilles however treats Priam as a relative of his own. Hospitality is a multiplicity of nationalized cultural forms, where expectations of the format and particular rituals turned into mechanistic habits at best or into tradable forms of service at worst. Hospitality is compared to other fictionalized “national” things: food, dress, folklores, etc. The transcultural and cosmopolitan nature of thoxenia can be seen as the precursor of universal human rights and equality. The disguised Athena is a traveler of unknown origin, the ultimate foreigner, but she receives the protection of the prince of Ithaca. For that the latter is rewarded not in the immediate form of a tangible resource, such as payment which “closes” the deal, but with Athena’s aid to his father Odyssey who eventually makes it back home and reunites with his son and wife. Theoxenia is performed without the expectation of an immediate or, in fact any, gain. It is a principle of living a life that cannot be therefore reduced to an industrial form. Theoxenia cannot be traded and compensated in similar reciprocal transaction, while hospitality is exactly that.

The trouble with hospitality is that it is perceived as an essential and exhaustive concept of interaction with the Other. It is dangerously false.

The failure of hospitality is structural rather than positional. Hospitality is analyzed and looked at as a continuation of theoxenic tradition from the ancient world. It is perceived as a positive achievement of the sociopolitical and cultural progress of Europe that led to the cultural openness, wider horizons of social learning and readiness for cultural exchange. I disagree with that. I think hospitality shares the aesthetic resemblance with theoxenia, ritually, and mechanistically, but it is an entirely different behavioral phenomenon. Theoxenia’s elements however were partly incorporated by monotheistic religions that followed the decomposition of the Ancient world, including Christianity and Islam. The presence of the remnants of theoxenia in there makes cults often more attractive than neoliberal societies and the ISIS recruiters sensed it.

The trouble with hospitality is that it is perceived as an essential and exhaustive concept of interaction with the Other. It is dangerously false. In the face of planetary challenges such as climate change, the resurgence of narrow mindedness, nationalism, and imperialism it is the time to get rid of this tribal understanding of the world and explore the universal protocol of humanity within all of us.

Denis Maksimov is a theorist, writer, and independent curator. He is a co-founder and co-director of the think tank and creative studio the Avenir Institute with nodes in Brussels, Berlin, London, and Athens. His research interests include concepts of "the political" and "the curatorial," aesthetics, and critical theory; geopolitics; futures studies. He addresses the subjects of genesis, legitimization, and transformation of aesthetico-political phenomena such as mythography, ideology, style, and regimes of power. In his projects, disciplinary paradigms are blended in transhistorical, intercultural contexts. Among them are the ongoing critical reading and anticipatory writing research group Queering Theogony for Alternative Futures in several non-for-profit art spaces in Athens; the engaged art project Game of Futures #2 in the 4th season of Critical Mass in St. Petersburg; the exhibition and public program Bureau for Public Insecurities in the context of 32nd Bienal de São Paulo Incerteza viva; video art exhibition Aesthetics of Power for ikonoTV Berlin; the group exhibition Do You Speak Synergy? at Harlan Levey Projects in Brussels; the art and theory laboratory State(?)-after-State in the Nationless Pavilion at the 56th Venice Biennale All the World’s Futures. He has a BA in Applied Political Science and an MA in International Relations and European Studies from The National Research University Higher School of Economics, Moscow, and MRes Art and Design from Sint Lucas, Antwerpen.