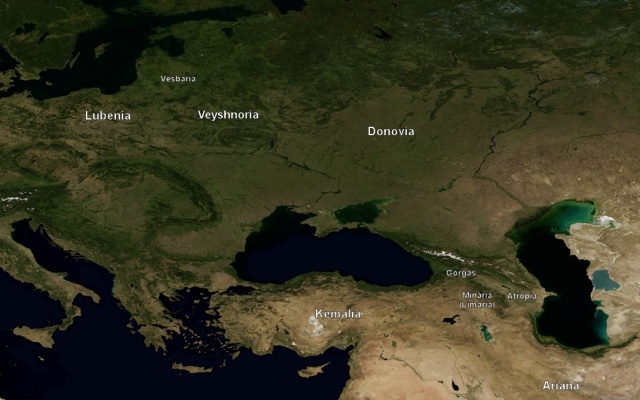 In gamification of reality, during Russia’s Zapad 2017 military exercises, three fictitious states were conjured into being: Veyshnoriya, Besberia and Lubenia, and as part of the war game Hegemon – Baltic Campaign that accompanied the Baltic Security Conference 2017, there was a simulation of a Russian attack on the Baltic states and Poland. It is of course difficult to deny the potential impact of the exercises on the actual balance of power in the region; nevertheless, the hyper-realism of such initiatives does throw some light on the fragility of the world we live in. The increasing awareness of this is having an impact on public opinion and on elected leaders in the global empires.

After 1945, numerous attempts were made to forecast the future and the evolutionary direction of technology and to predict the shape of international relations and the direction in which value systems might evolve. The future ceased to be considered the moral or philosophical category it had once been, becoming instead the subject of sociological and technical analysis. Futurology was employed in the planning and modelling of reality on both sides of the Iron Curtain. However – and perhaps surprisingly so, considering today’s frantic pace of technological progress – the grand schemes for taking control of the future that were the subject of speculation during the Cold War remain beyond our reach. We operate within an ever-diminishing timespan. We talk about the future less than we did in the 1970s, if one is to judge by The Limits to Growth, a 1972 Club of Rome report or initiatives such as the Third World Future Research Conference in Bucharest, also in 1972, not to mention the achievements of Lithuanian or Estonian futurology.1

This short-term outlook affects the manner in which the majority of governments and boards of corporations organise their – and our! – future. Long term investment in human resources does not translate into instant profit, so it is scaled down. International institutions, humanitarian and non-government organisations are obliged to follow the same logic and set out their programmes on an annual basis, or at best covering a few years. It seems that no-one, from bureaucrats and board members to voters and the beneficiaries of international aid, is today in a position to escape the curse of short-termism. Thinking about the future can indeed be off-putting. One example is the status of Central and Eastern Europe, which for three decades has been trying to reduce its distance from the ‘core’ – but the end of this process is nowhere in sight. The asymmetry of experience in the East and the West and the adoption of the ‘cargo cult’ formula of capitalism in our part of Europe mean that the journey from Brussels to Vilnius or Warsaw remains a form of time travel. What’s more, the previous vision of the future in Central and Eastern Europe has reached its sell-by date; it is no longer appealing. Currently, there is nothing to replace it, and the resultant void is being filled by various spectres of ‘dictatorships of democracy’ and authoritarianism.

Poland and Lithuania – semi-peripheral countries, although situated in the geographical centre of Europe – are grappling with the model of the nation state, which burdens both their development and mutual relations. Some invoke the myth of the Polish–Lithuanian Commonwealth, fed by the idea of its multiculturalism – an enduring lesson in co-existence. Yet, this is a legacy that remains locked within the confines of the memory of the individual nations. Some keep dreaming about Marshal Piłsudski, others – of the Polish-Lithuanian War. For some Lithuanians, Poland is still a land somewhere between Russian Kaliningrad Oblast, Germany and Scandinavia, which they have to traverse in order to find themselves in the West; for many, this is a country of cheap food. As the saying has it, Lithuanians work in the West, get their fuel from Belarus, smoke Russian cigarettes and go to Poland to buy food. Many are acutely familiar with the route across Poland. As for Poles, they view their border with Lithuania chiefly from the perspective of nostalgia and retro-tourism. In the context of fuels energy policy and cultural relations, our approach is indecisive. Is it possible for a moment to forget Polish-Lithuanian relations and how they had been conditioned? Is it possible to view this part of Europe through a prism other than a national or historical one, with an emphasis on territorial disputes? Finally, are countries such as Poland and Lithuania capable of achieving more by strengthening co-operation, comparing their respective transformational expectations and overcoming their nationalism?

We want to venture beyond narratives that play on nostalgia and antagonism. In this issue of Obieg, we propose looking into the future. Futurology enables us to realise that the current status quo will one day disappear, never to come back. Let us then conduct a radical thought experiment and imagine that such familiar nation states as Poland or Lithuania no longer exist. As would be the case for many other countries, for Poland, a country that is extraordinarily sensitive in matters of history, the very hypothesis suggested here would also potentially be interpreted as a deplorable breaking of a fundamental taboo and a provocation to history to repeat itself. The Polish viewpoint is to a large extent shaped by a historiosophically-driven fetishisation and absolutisation of statehood. Similarly, in Lithuania it does not take much to stir up and bring to the surface of public debate the fear of losing territory. Nevertheless, it remains the case that neither Lithuania nor Poland existed in the Stone or Bronze Age, for example, and with a high degree of probability one can assume that over a long-enough time scale, both nations states will be referred to in the past tense – if, indeed, there is anyone left capable of talking.

Speaking of the future, very few refer to changes in our social structure, let alone in the axiological sphere. Acceleration related to technological development causes the future to be understood in terms of contingency, as a gift that is waiting for us. ‘Unpacking’ it becomes a technical matter of acquiring the appropriate knowledge and instruments to collect and process information. This opens up a number of questions about the role of the future in the era of the continually shortening time horizon of our planning and action.

For good forecasting, however, it is necessary to have a thorough understanding of the nature of the information revolution and the processes that connect people with this phenomenon. The creators of forecasting techniques rarely sought to obtain objective representations of the likely future, but tried rather to invent tools that would have an impact on human activity. These techniques served, therefore, as tools for decision making or for setting the imagination free; they were designed to nudge human beings to act in one particular way rather than any other. The change in the perception of time resulting from ever-accelerating capitalism raises questions about whether it is possible to renew our understanding of the future and under what conditions it might be possible to speculate about new opportunities.

Employing the tools of futurology, military simulation and the quest for utopias, in Obieg No. 9 we speculate about the possible forms and potential of newly-hatching, hybrid states. We look at the phenomenon of fictitious or utopian states, which are not only theoretically capable of questioning the current geopolitical order and the concept of the nation state, but also of exerting a tangible influence on reality. We also point out apparently paradoxical situations, when quasi-countries that are dreamt up by politicians under nationalist rallying cries destabilise nation states in the name of competing nationalisms, indeed bolstering nationalist ideas. One notable example is the annexation of the Crimea and the declaration of the Luhansk People’s Republic and the Donetsk People’s Republic. These phenomena have been mirrored, albeit on a proportionally much smaller scale, by grass roots activity inspired by artists, art aficionados and influencers that relies on creating fictitious countries and secret organisations.

Dissociating ourselves from any nostalgia for the ‘good old’ times’ of imaginary national greatness, we propose in the current issue of Obieg to scrutinise the new tool kit for creating nation states. The hypothetical scenario of ‘What would happen if’ Poland and Lithuania were to disappear from the map has inspired us to invite authors whose works and writing are not only related to different concepts of statehood but who are also actively connected to both countries and firmly grounded in the geography of Central and Eastern Europe. In Obieg No. 9, futurology meets the realism of fiction.

Our apologies to Prof Jenny Andersson for missing the attribution to her work from the original introduction of this article.

The idea for The News from Elsewhere was conceived during our research residency as part of "Trauma & Revival" (as part of a project by Bozar from Brussels) at Fondazione Pistoletto in Biella, Italy. Curator: Aria Spinelli.

We would like to express our gratitude to Rasa Rimickaitė, cultural attaché of the Embassy of the Republic of Lithuania in Poland for her support and help, also to dr Eglė Rindzevičiūtė for her substantive comments.

* Coverphoto: "News from Elsewhere", Vitalij Strigunkov, 2018. Courtesy of the artist.

[1] We can mention here The Institute of Mathematics and Informatics in Vilnius, est. 1956, and Estonian Institute of Futures Studies (still continued and run by Erik Terk) at University of Tallin. 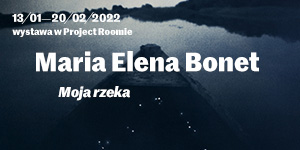 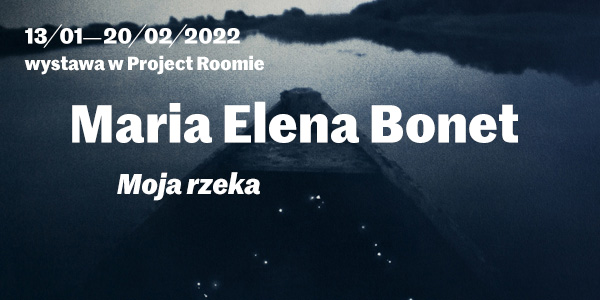 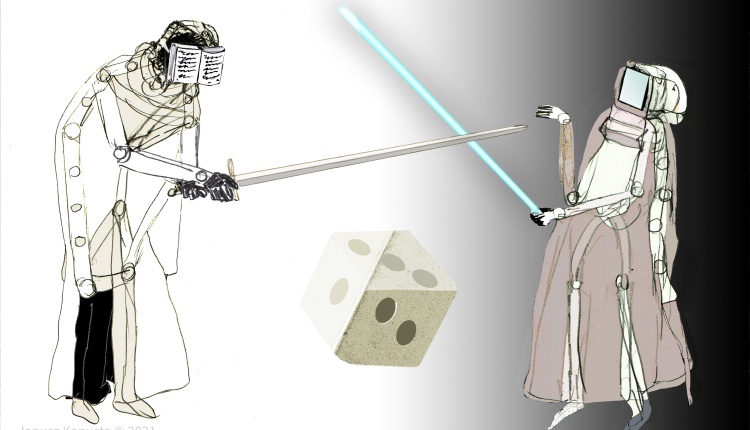 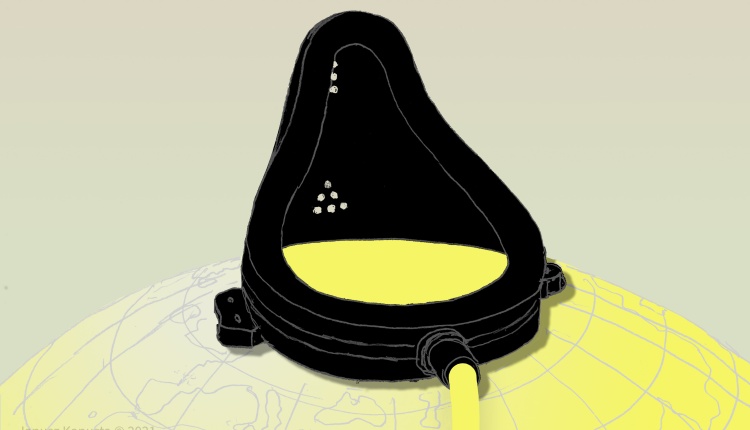 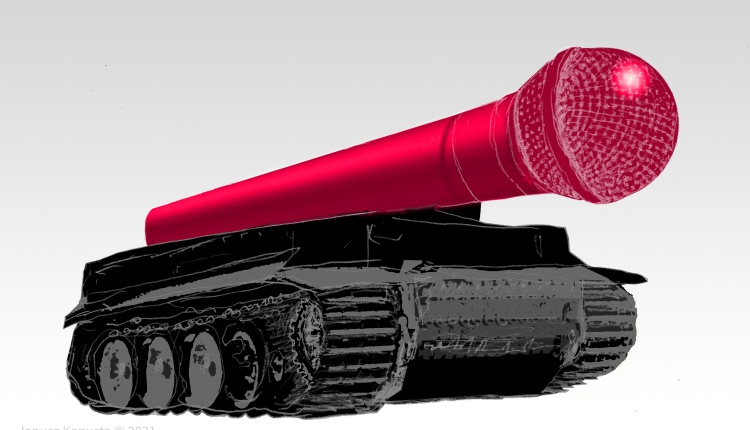 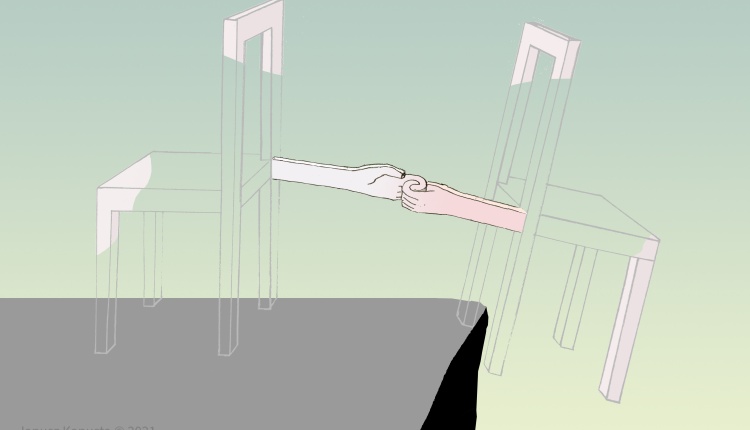 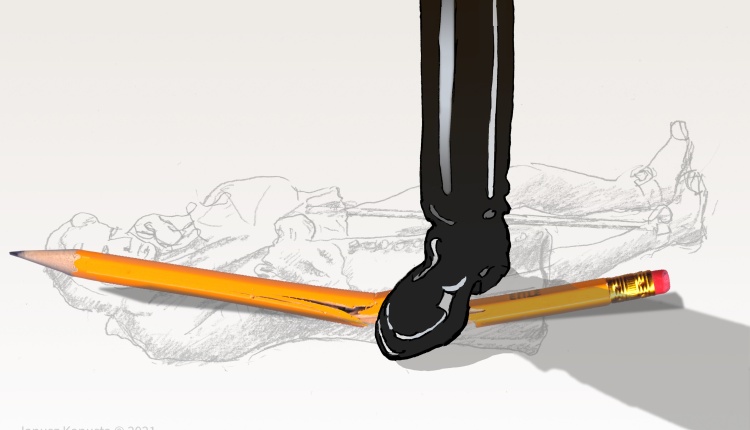 Our apologies to Prof Jenny Andersson for missing the attribution to her work from the original introduction of this article.

The idea for The News from Elsewhere was conceived during our research residency as part of "Trauma & Revival" (as part of a project by Bozar from Brussels) at Fondazione Pistoletto in Biella, Italy. Curator: Aria Spinelli.

We would like to express our gratitude to Rasa Rimickaitė, cultural attaché of the Embassy of the Republic of Lithuania in Poland for her support and help, also to dr Eglė Rindzevičiūtė for her substantive comments.

* Coverphoto: "News from Elsewhere", Vitalij Strigunkov, 2018. Courtesy of the artist.

[1] We can mention here The Institute of Mathematics and Informatics in Vilnius, est. 1956, and Estonian Institute of Futures Studies (still continued and run by Erik Terk) at University of Tallin.