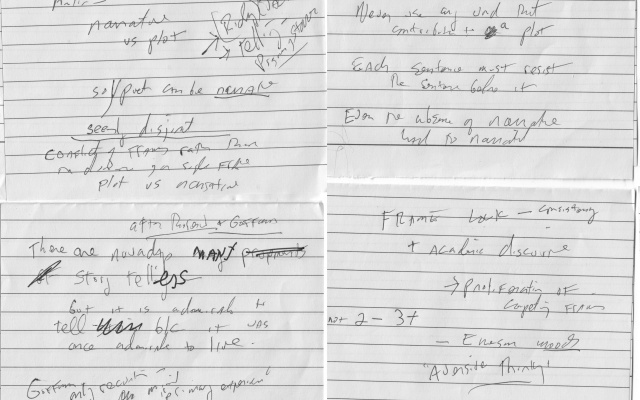 Against Storytelling / Before Time (for David Antin)

In this recording, Charles Bernstein starts out reading Against Storytelling / Before Time and ends with a reading of part of Stelae for Failed Time, from “Shadowtime” (Bernstein’s libretto for Brian Ferenyough’s opera in/about/around Walter Benjamin). The recording concludes with a coda called Now Time – a sound version of the final section, made for Obieg. The talk was presented at the India International Center, New Delhi, “Against Storytelling” symposium on 24 February 2018, organized by Amit Chadhuri and sponsored by Ashoka University and the University of East Anglia (UK). As Bernstein mentions in the talk, he made a set of cards during the symposium (see images below), each with some notes or short text, along with the titles of the two poems (Johnny Cake Hollow, and Rivulets of the Dead Jew). He shuffled the talk and then presented it in the random order of the card shuffle ­– a gesture intended to contrast with David Antin’s seamless talks. 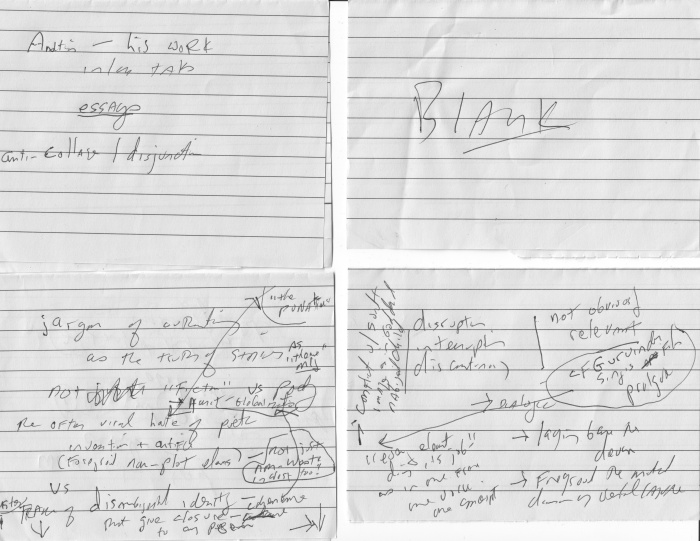 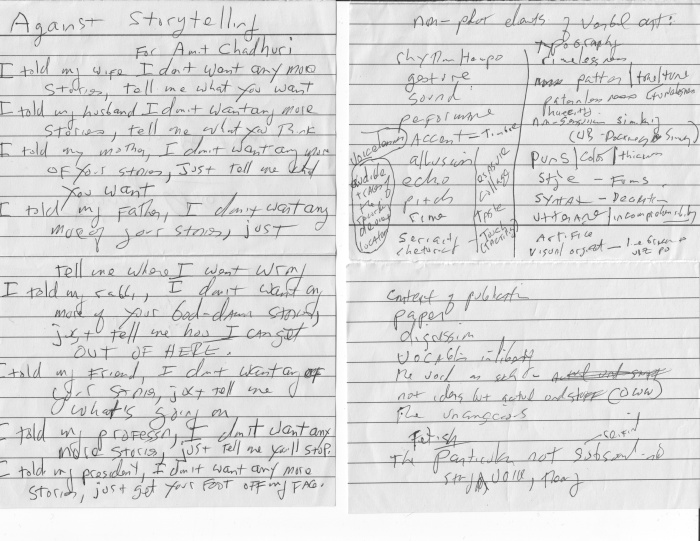 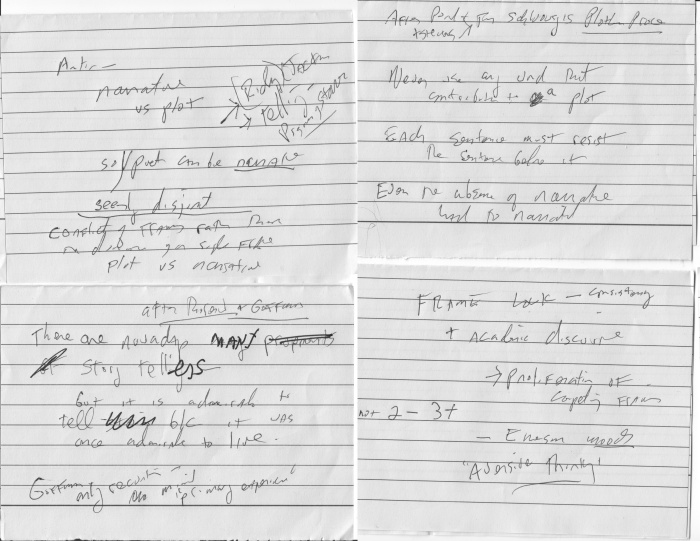 Charles Bernstein is the author of Pitch of Poetry (University of Chicago, 2016) and Recalculating (Chicago, 2013). In 2010, Farrar, Straus & Giroux published All the Whiskey in Heaven: Selected Poems. He edited L=A=N=G=U=A=G=E (1978–81, with Bruce Andrews), a magazine that blurred the boundaries between critical writing and poetry. Bernstein is the Donald T. Regan Professor of English and Comparative Literature at the University of Pennsylvania, where he is co-director of PennSound. In 2002, he published A Conversation with David Antin (Granary Books), an exhaustive dialogue between the two poets over the life and work of Antin. Bernstein is a fellow of the American Academy of Arts and Sciences. In 2015, Bernstein was awarded both the Münster Prize for International Poetry and the Janus Pannonius Grand Prize for Poetry. More info at the Electronic Poetry Center.

David Antin (1932–2016) was a poet, artist, and critic. He published literary reviews and pieces of art criticism. Before pursuing a career as a poet, he published several science and math books. He also published literary reviews and pieces of art criticism. His talk poems – a blend of poetry, storytelling, and critical thinking – were created based on improvised talks delivered in public and taped. They were published in collections such as Talking (1972), Talking at the Boundaries (1976), and What it Means to be Avant-Garde (1993). An issue of the Review of Contemporary Fiction devoted to his work was published in 2001. Antin taught in the experimental visual arts department at the University of California at San Diego. He received a fellowship from the Guggenheim Foundation and the National Endowment for the Humanities, among many other honors and awards.