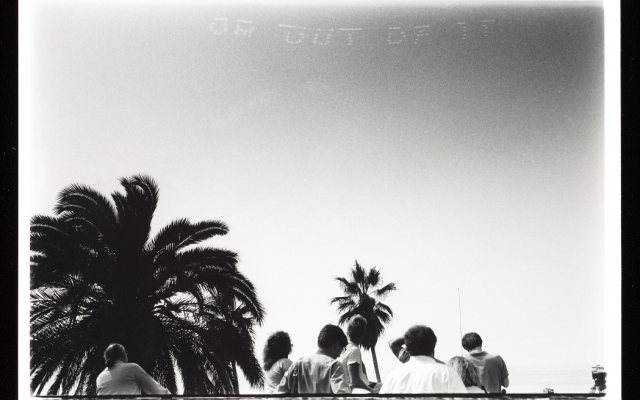 (from an unpublished manuscript by David Antin, Getty Archive)

In 1987 and 1988, David Antin produced two Skypoems, poems written by a row of five sky-typing planes flying side by side, composing text with puffs of smoke like an ethereal dot matrix printer.

if we get it together

can they take it apart

or only if we let them

if we make it together or

find it will they break in

or out of it or leave it as

they find it strictly alone

Antin introduced the longer spaces between words to stretch out the time of composition of each line. During the performance, he directed the planes to make a “long pass to the north” before writing the next line so that the preceding line would have time to disappear. 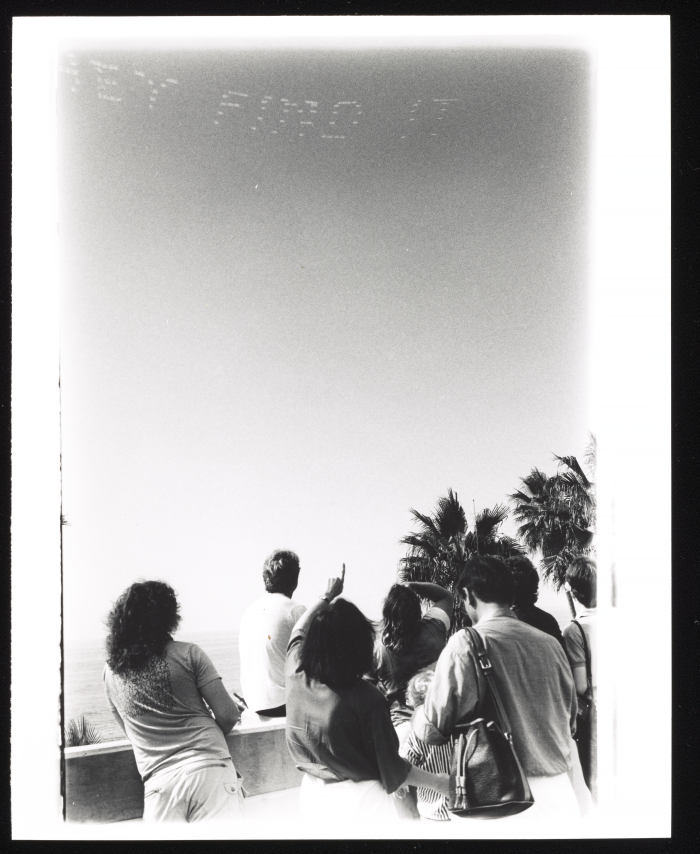 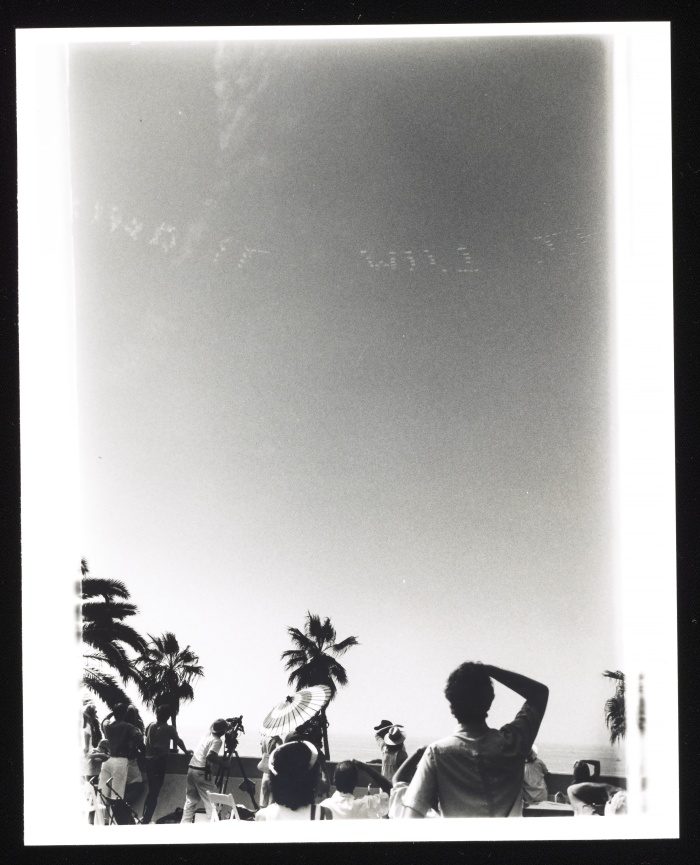 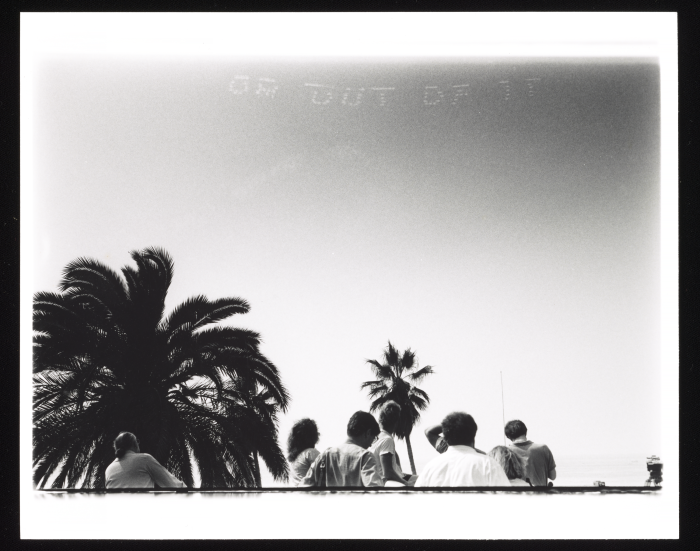 In a text titled Fox Fine Furs, Antin explains that he was inspired to make this work by a childhood memory of seeing advertising planes sky-type a publicity message in Coney Island. He describes recalling how it gave him “such a physical experience of the act of reading” that he decided to replicate it with one of his own texts. Antin’s initial idea for the Skypoems was of “an epic poem stretching across the United States over 20 or 30 years, 3 or 4 lines a year ... gradually being written for people who would never see all of it.” He was only able to produce the two parts of this epic poems described above, though his correspondence shows that he kept trying to revive the project.

In 2015, I was invited to be a part of a year-long curatorial and artistic project at La Criée Centre d'Art in Rennes, France, by its director, Sophie Kaplan, along with the artists Félicia Atkinson and Yann Sérandour. On my suggestion, we invited David and Eleanor Antin to participate in the project. I spoke with Eleanor and David by phone and they accepted. We spoke of the Skypoems, and he was enthusiastic about producing these works anew. He passed away shortly thereafter. Ever since, Sophie and I have been committed to honor his work by restaging the Skypoems. With the support of LACMA, the Hammer Museum in Los Angeles, and the MCASD in La Jolla, a project is underway to revive these vividly ephemeral works on 29 September 2018 in their original locations. 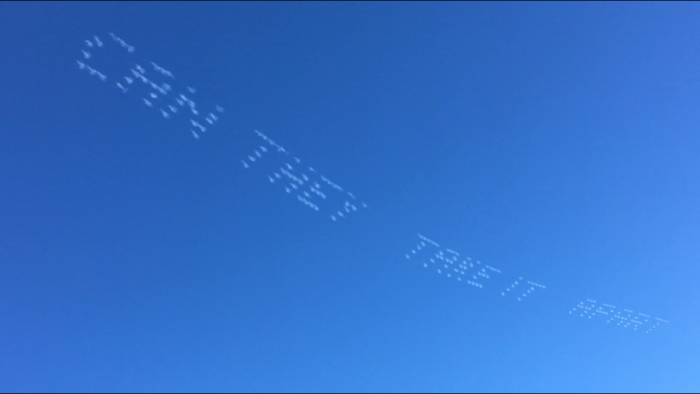 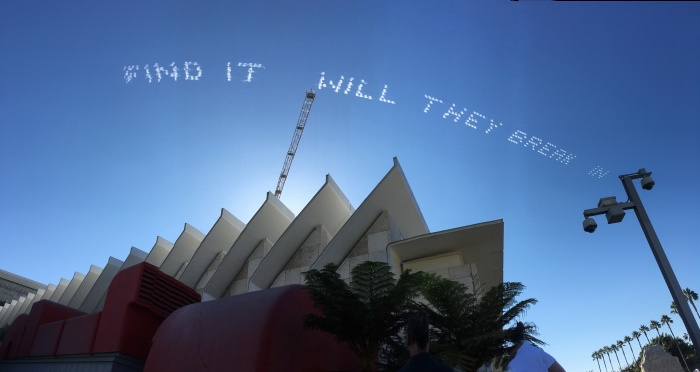 Julien Bismuth is an artist and writer who currently lives and works in New York. His work has been exhibited widely, including at the Palais de Tokyo in Paris, the Kunsthalle Wien in Vienna, and the Solomon R. Guggenheim Museum in New York. Bismuth is also the co-founder of Devonian Press with Jean-Pascal Flavien, and the author of A Cover to Cover (Uncover) and Pages with Motto Press in Berlin. Together with Jean-Pascal Flavien, Bismuth is the founder of the publishing house Devonian Press. Upcoming projects include participation in the 2018 Cuenca Biennale as well as a solo project at the Nomas Foundation in 2019.

David Antin (1932–2016) was a poet, artist, and critic. He published literary reviews and pieces of art criticism. Before pursuing a career as a poet, he published several science and math books. He also published literary reviews and pieces of art criticism. His talk poems, a blend of poetry, storytelling, and critical thinking, were created based on improvised talks delivered in public and taped. They were published in collections such as Talking (1972), Talking at the Boundaries (1976), and What it Means to be Avant-Garde (1993). An issue of the Review of Contemporary Fiction devoted to his work was published in 2001. Antin taught in the experimental visual arts department at the University of California at San Diego. He received a fellowship from the Guggenheim Foundation and the National Endowment for the Humanities, among many other honors and awards.