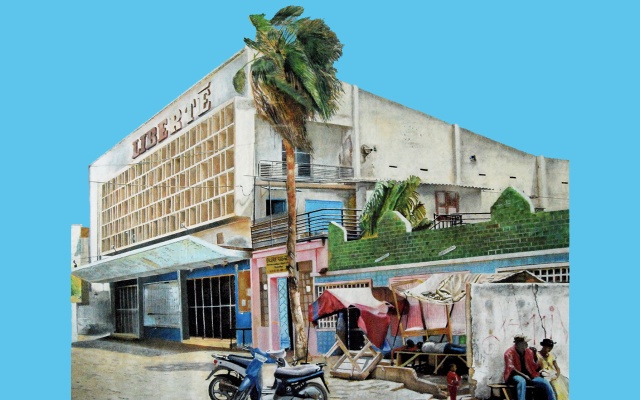 The history of Senegalese cinema is both the cinematography – the creators and their works, in which Dakar played an important role, and the politics that changed the fate of many cinemas in Dakar.

The city on the big screen...

From its advent, the film industry has turned to the street, to the city. The urban space and the places that provide it with structure, its roads, and its neighborhoods have become sites of expression for filmmakers. More than decor, the city is a character in its own right and at times may even be the protagonist.

Everyone remembers Woody Allen’s New York in “Manhattan,” of Martin Scorsese’s New York in “Taxi Driver,” “Gangs of New York,” and “Goodfellas” or New York as it was depicted by Sam Raimi in “Spider-Man.” Paris has also been captured from every possible angle, the French capital being in fact the most filmed city in the world. From René Clair to Christopher Nolan, the cinematic efforts of La Nouvelle Vague, Cédric Klapisch, Jean-Pierre Jeunet and many others, the City of Lights has time and again inspired film directors from across the globe.

Major Western metropolises are extensively represented in film, but what of African cities? With what gaze do homegrown or foreign filmmakers treat African cities?

To answer these questions, it is necessary to go back to the origins of African cinema. According to the genealogy traced by André Gardies, the African cinematic adventure was born in 1955 with the film Afrique-Sur-Seine (“Africa-on-the-Seine”). Filmed in Paris, the film is the result of a collaboration between four directors: Mamadou Sarr, Jacques Melo Kane, Robert Christian, and Paulin Soumanou Vieyra. In this work, the question of how to represent the continent emerges straightaway, as the directors confront a disconcerting paradox; depicting Africa with images filmed in Paris. Even if it's true that filmmaking had existed in Africa well before this experience, the continent was at the time captured on film solely by Westerners, in instances of either colonial or ethnographic cinema. These two genres can be qualified as “paternalistic and preachy” and have contributed to a “falsification of the fair history of [these] people,” to cite a review of the film Afrique-Sur-Seine.

We have to wait until 1963 for Ousmane Sembène to make Borom Sarret (“The Wagoner”), filmed on the continent itself and thus marking the real beginning of African cinema. Film industries developed in nearly all of the young West African states, and the Senegalese cinema has since become one of the richest. It is precisely with Senegalese filmmakers that we are concerned here. How do they engage with and depict their country, and in particular the city of Dakar?

In the space of fifty years Dakar has become a metropolis of several million inhabitants with a rate of urbanization that is that is more than 95% and an urban identity in constant evolution. The old Lebu village gave way to a disproportionate and cosmopolitan metropolis seen as a geographical and cultural crossroads. Senegalese filmmaking has itself also changed, if the films of the early 1960s constituted a response to colonial filmmaking, a young generation of directors has abandoned the essay-like style of its precursors, (Ousmane Sembène, Paulin Soumanou Vieyra, Djibril Diop Mambéty), in favor of fictions that are of a Western standard, for example Dakar Trottoir (“Dakar Pavements”), released in 2013 and directed by Hubert Laba Ndao. One thing however has not changed throughout the years; the way in which filmmakers represent space. In the form of documentaries and fictions, wanderings and narrations, they invite the viewer on a journey through the streets and neighborhoods of the Cap-Vert peninsula.

Landscapes are barely used and wide shots are rare. Do filmmakers reject these methods for technical reasons, because of a lack of interest in these forms or because of a desire to focus attention on the actors? It is hard to say. Establishing shots, aerial shots or high-angle shots are also sparsely used. Yet street scenes allow filmmakers to fulfill this need for space.

Certain scenarios are built around the itinerary followed by a hero, such as in Tey (“Today”) by Alain Gomis, a film in which we accompany the protagonist on his final stroll through Dakar, a city grappling with the political and social reality of the 2012 presidential elections. In these “walking-movies” a particularly interesting representation of the city emerges.

At times, the city space takes its form through symbols; streets, cars and the edges of sidewalks that signify movement from one place to another. Buildings symbolize the downtown area, with its service sector, the villas with their beautiful gardens - a bourgeois luxury.

While some films present a bourgeois city of wealthy neighborhoods, others such as Borom Sarret address poverty. Even if the last sequences of the film take us on a tour past the buildings of Plateau, the downtown area of the Senegalese capital, Sembène doesn’t only show this rich neighborhood where International Style buildings alongside Neoclassical and Sudano-Sahelian Style inspired state buildings. His film, the chronicle of a day in the life of a poor hauler who transports clients and goods in a horse-drawn cart, paints a picture of everyday life in Dakar’s slums in the years following independence. The contrast is startling. Almost ten years after Sembène’s masterpiece, Djibril Diop Mambéty explored the same issue with Badou Boy and the docufiction film Contras City. Dakar Trottoir by Hubert Laba Ndao also sketches a rather somber picture of the city. The director reveals to the viewer a “Dakar by night,” beset by violence and where prostitutes, dealers and crooks of all sorts move about.

By not hiding the precarious conditions within which some of its citizens live, these films make explicit the richness and complexity of the city. 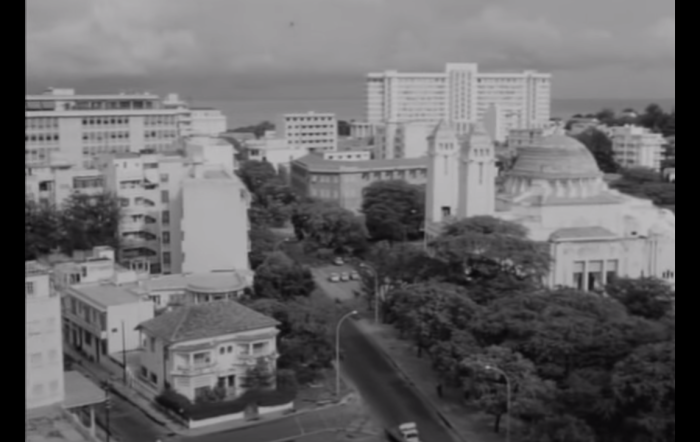 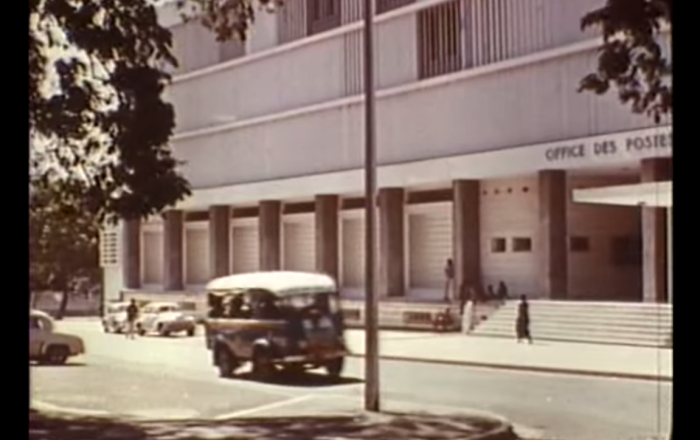 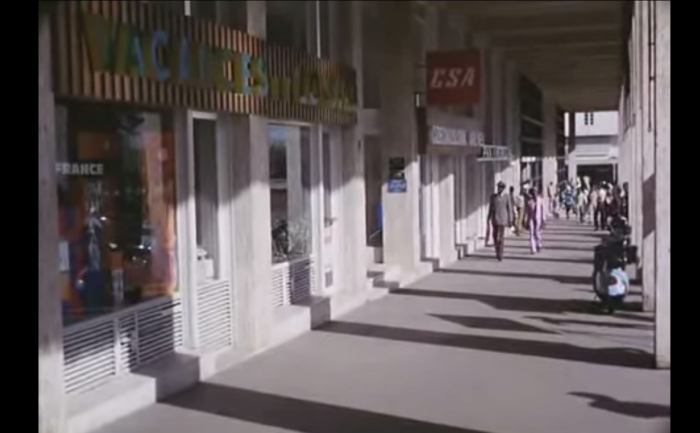 Screens in the city...

Is it possible to talk about films without mentioning cinemas? In the early 1970s Dakar was home to 80 cinemas, but these wouldn’t outlast the end of the state institutions and tools such as, the New Society of Film Promotion (that was dissolved in 1990), and the Senegalese Society of Movie Importation, Distribution and Exploitation (privatized and then dissolved in the early 2000s), which marks the decline of the film industry in Senegal. The result of the structural adjustment policies imposed by the World Bank in the 90s.

Today there are only a dozen cinemas left in the capital, but they neither provide the level of comfort, nor do they have the specific architectural features worthy of being called a cinema.

“Le Paris,” “Le Plaza,” “El Malick,” “El Hadj,” “Liberté,” “El Mansour” ...these names are slowly fading from the memory of Dakar’s citizens. These cinemas were however the symbols of cinema’s heyday in the Senegalese capital, a time when one could see the latest blockbusters and when cinemas were spaces for family trips and where privileged adolescents could meet up. 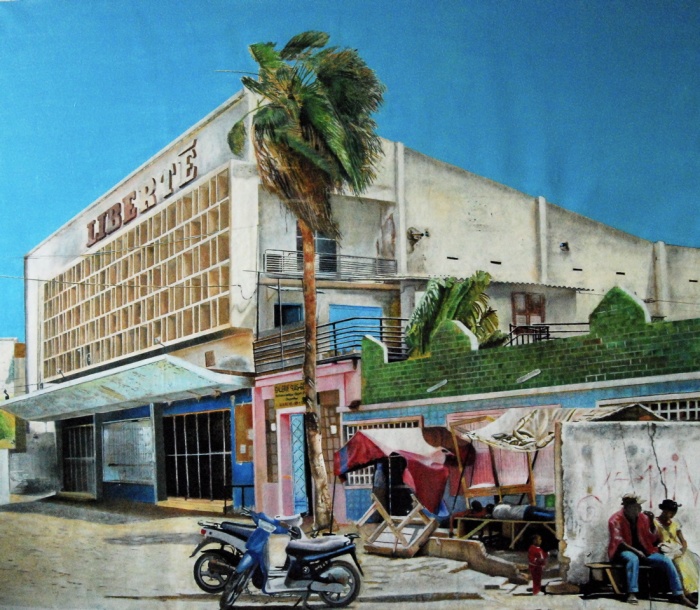 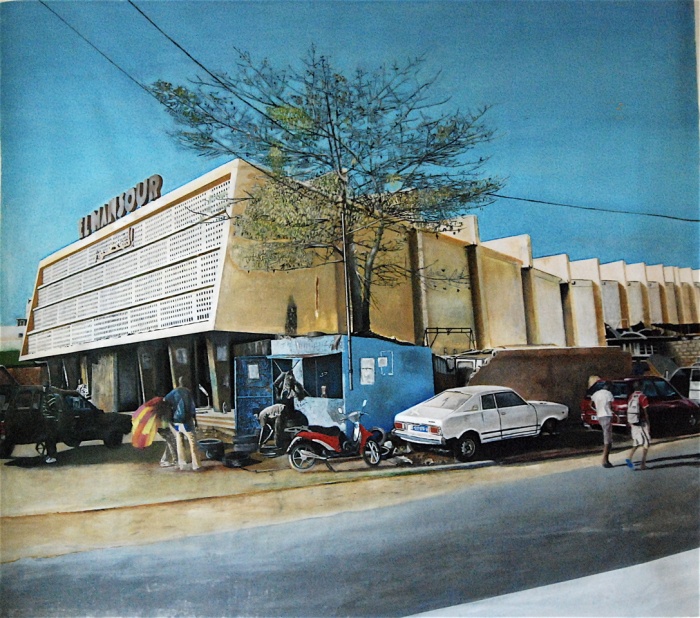 Many people still remember the excitement that was incited in 1997 by the release of Titanic at the “Le Paris” cinema, the afternoons spent after class in these big dark rooms that could hold up to 800 people. Memories are all that remain for Senegalese film fans who have to make do with satellite television, DVDs (pirated or not), and downloading or streaming films ever since the country’s cinematic industry “sank.”

If they haven’t been demolished, like “Le Paris” in 2006, these former cinemas are at best converted into shopping centers or at times even churches. But in most cases they have been abandoned and are now used as informal dwellings. Over time, local citizens have taken over these buildings that have fallen into disuse, and life has been reorganized around them, these unique architectural wastelands typical of the postcolonial era in West Africa. The only signs by which we can apprehend that these concrete mastodons with their openwork facades welcomed, at a different time, thousands of people, are the entranceways and the scraps of film posters on the old hoardings.

In July 2012, the French Institute of Dakar, today one of the rare places in the city where one can still see films on the big screen, presented “Cinema Melancholia,” an exhibition about two artists, Laurent Gaillardon, a young French filmmaker and Cheikh Ndiaye, a Senegalese artist. “Cinema Melancholia” sounds like an homage to the city’s picture houses, the vestiges of a bygone era, but it also shows that not all of Dakar’s projectionists have laid down their arms.

In the documentary, directed by Laurent Gaillardon, the viewer discovers a small and unpretentious cinema in the Médina neighborhood, the “Bada Ciné.” For better or for worse, this 40-seat cinema still stands in a neighborhood where every other cinema has disappeared. A small and independent institution, it seeks to revive a taste for moviegoing among locals. The documentary enters into a dialogue with two impressive works by Cheikh Ndiaye that feature in a series on the reintegration of former cinemas into their urban environment. For Ndiaye, architecture is a place of life, a construction site that he uses as a lens through which he can observe contemporary society.

Despite the cinemas themselves disappearing, this in no way means that moviegoing is a dead pastime. Beyond the few cinemas that remain, as of a few years ago it was possible to note a growth in cinema clubs, private screenings, festivals (“Ciné Droit Libre” and “Gorée Cinema” among others) and even of innovative initiatives such as that of Cinewax.

And as of last December, while waiting for the arrival of three screens planned for “Sea Plaza” (one of the capital’s shopping centers), film buffs have benefited from a temporary structure installed on the roof of the mall, where the latest blockbusters are shown.

In conclusion, when it comes to Dakar on the big screen and the Senegalese movie industry, the first words that come to mind are “nostalgia,” recalling the golden era of the 70s with its prolific and talented directors, and also “hope” when thinking of emerging filmmakers and the alternative methods of distribution that are appearing.

Translated from the French by Dulcie Abrahams Altass

Carole Diop is the co-founder and co-editor of ‘Afrikadaa' magazine. The young architect graduated from the National School of Architecture Paris-Val de Seine (ENSAPVS) in Val de Seine outside of Paris (École Nationale Supérieure d’Architecture, Paris-Val de Seine), and now works in Dakar, where she moved after graduation. Carole Diop chairs the ‘Afrikadaa’ Association in Dakar which actively participates in the cultural life of Senegal by holding monthly ‘SN Art’ cultural meetings enabling the exchange of experiences on topics related to the development of the creative sector in Senegal between individuals from all walks of life who are involved in the field of culture.